From Borderlands Wiki
(Redirected from Thresher)
Jump to: navigation, search 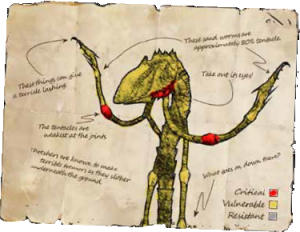 The thresher is a creature that lives underground. They can range in size from a bit larger then a vehicle to towering monstrosities. They are snake-like in appearance for the main body, but have a mushroom-looking "head" and multiple tendrils branching off from said body. With the multiple tendrils, it is possible for them to attack multiple enemies at once. It would seem they cannot attack underground, but must burrow up to the surface in order to assault a hostile. They can appear in sand dunes and from the water.

Threshers are violent worm-like cylindrical monsters that move by burrowing. While burrowing, they ingest the matter they pass through. They must always be eating, so they’re always burrowing and moving, and they can grow to enormous size—it’s actually not known whether there’s a limit for how big a thresher can get, really.

All thresher varieties move primarily by burrowing, although some of the smaller ones can also, from burrows in the ground, launch themselves through the air in great arcs before landing and burrowing right back down again. Their methods of attack are varied, depending on the species. Apart from the ones small enough to leap in the air, threshers are too large, multifaceted, and cumbersome for Maya to suspend them with Phaselock; instead, they just take sudden damage.