From Borderlands Wiki
(Redirected from Tediore)
Jump to: navigation, search

Breaking your enemies shouldn’t break the bank! That’s why Tediore weapons are disposable. Of course, Tediore, being the high-profit, low-consumer safety corporation they are, didn’t have time to fully perfect the technology for their disposable weaponry, so all Tediore weapons explode when reloaded. The Tediore corporation, ever optimistic, declared this a “feature” rather than a “glaring safety hazard” and saw their stock shoot up 50 percent overnight. Tediore weapons are for killers on a budget—the kind of people who like to hear their sales pitches from a woman with white teeth, an overenthusiastic voice, and an expression on her face that just slightly screams of existential agony. 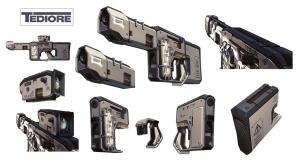 Tediore is one of the confirmed manufacturers for Borderlands 2. While Tediore weapons in the first game were characterized as having a very fast reload speed, they will now simply be disposable. Discarded weapons can be thrown like grenades, the power of which will depend on the number of rounds remaining in the magazine. The player's Digistruct Module will reconstruct a new loaded weapon. This could possibly mean spamming, as a new weapon is constantly appearing.

The style of the weapon is to:

Tediore pistols are the most disposable of weapons—instead of having a magazine to replenish, you’ll just toss aside a Tediore pistol when it’s expended of ammo. Oh, and then it will blow up. Any unexpended ammo left in the gun adds to that explosion. There are two ways to play with Tediore weapons—you can run their “magazines” all the way down and then just plan on aiming your automatic weapon toss, or you can plan around the weapon tosses and just discharge a round or three so you can reload. The former approach is normal gunplay with an explosive twist every reload; the latter approach is essentially taking your pistol ammo pool and saying, “I will treat this as a pile of grenades in ammo form.”

Tediore shotguns behave like the average shotgun you expect—a decent amount of rounds per magazine, good damage, average spread and accuracy. The difference comes when you reload, and you toss forward the bulk of the shotgun as a mine that explodes on impact. With the shotgun’s extra heft over pistols and SMGs, discarded Tediore shotguns will be tossed in a bit less of a forward arc. Like other Tediore weapons, the damage of the discarded shotgun is equal to the number of rounds left in the magazine, plus one for the exploding body of the gun itself. This means that if you take a Tediore shottie with good stats, discharge it once just to get it ready to reload, then reload on purpose to throw it early, you’re essentially tossing some of your shotgun ammo reserve as a mega-grenade. Keep this in mind if you have a Tediore shotgun on hand, as this enables enormous damage for relatively low effort against some enemies who make easy targets, or who aren’t good at dodging.

Tediore rocket launchers usually operate a bit like cheaper Torgue launchers—they fire one hefty rocket at a time. Things change come reloading time. With other types of Tediore weapons, your character tosses the gun away like a grenade during the reload process. With Tediore launchers, your character actually primes the launcher itself to fire forward! This basically means that every Tediore launcher reload is itself another rocket launch, though it’s kind of a clumsy, dumb one.

SMGs made by Tediore are like high-octane versions of their equally disposable pistols. You know the drill—don’t reload during lulls in combat unless you have an enemy to reload at, and instead, run your magazines down until they’re totally dry. You don’t want to accidentally reload prematurely out of habit, throwing your half-empty SMG into an explosive canister that detonates and kills you when there’s nothing soft around to dent for Second Wind. Tediore SMGs, like shotguns, feature enough raw damage potential in a fully loaded magazine that it can be a viable strategy to attack by discharging one round just to enable a reload, then tossing all remaining rounds away. If your aim is true, this will output the damage of the entire magazine at once in an explosion, as a new SMG digistructs in your hands. Watch your ammo reserves if you like using this faux-grenade strategy, as you can run dry quickly reloading nearly full Tediore weapons. Remember, Bullet Damage x clip size = max possible weapon grenade damage.