From Borderlands Wiki
(Redirected from Skag)
Jump to: navigation, search 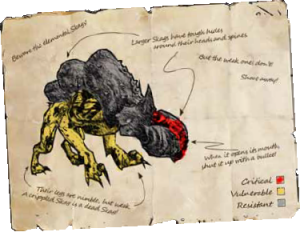 Their hide is thick and spiny, almost like rock, but for most skags it’s not quite like armor, so fire is still the way to go. This thick hide does mostly obscure their weak spot, though. It’s not just the head like most creatures—it’s actually inside their mouths! Shoot for their gaping maws as they bellow, spit, or barf to deal extra damage.

Badass skags are imbued with elemental powers innately, and their high status in the skag hierarchy allows them to pass elemental powers on to their betas. A very manageable fight with a half-dozen skags can very quickly get out of hand if a Badass Fire Skag shows up and sets them all aflame, enhancing the offense of every beast.