From Borderlands Wiki
(Redirected from Rat)
Jump to: navigation, search 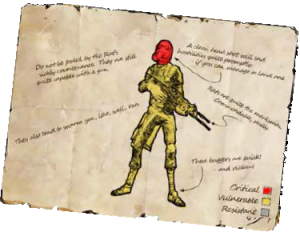 Every bandit lives off the beaten path, especially on a world like Pandora, but rats are a little too far off the beaten path. These lank survivalists have developed intricate tunnel networks that only they can access, allowing them to pop out of the ground as though from a nest, like varkids. They come to the surface to hunt and scavenge.

In keeping with their insect-like domain, the rats also dine on so-called strange meat… that’s right, they’re cannibals. If rats and other bandits get along, it’s mostly because their paths don’t much overlap. But to a rat, a dead marauder is dinner just the same as a dead Vault Hunter or Hyperion soldier. If there are corpses strewn about, rats can gnaw at them to regain lost health!

The slim builds of rats, better suited to duct-crawling and tunnel-swimming than brawling and boxing, mean that rats prefer ranged attacks, for the most part. They’d rather fire their rifle than get in close; really, they’d rather steal something and get back dirtside than engage in battle at all!