From Borderlands Wiki
(Redirected from Rakk)
Jump to: navigation, search 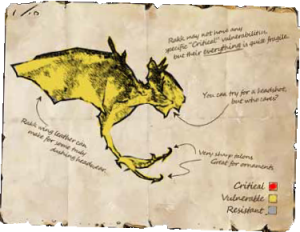 Rakks are passive generally unless provoked, which will often be by stray gunfire, either yours or the enemy’s. Rakks are just as willing to divebomb bandits who accidentally zing them as they are to divebomb you.

Once provoked, rakks circle until they find an angle they like, then fly into a straight path at the target to divebomb. Their final approach is obvious for its directness; if they’re flying straight at you in a particular posture for more than a second, it’s not a swoop that just happens to be in your direction.

As they dip and swirl in midair, rakks are difficult to strike, but they make themselves obvious targets as they arrow in to attack. Straight-on sighted fire at them with any weapon as they swoop in will work; hip fired shotguns and very late hip fired sniper rifles will do wonders against rakks, too. Using late shots from these weapons to snipe rakks at the last moment has the advantage of dropping the loot right on top of you. For style points, kill rakks with Tediore reloads… this also unlocks an Achievement. (Using Maya’s Phaselock to freeze a flying enemy in place to produce an easy target is also a great tactic.) Rakks are almost never alone, and instigating a fight with one will usually commit you to a fight with a half dozen or more.

As a thin-skinned cross between a bat and a bird, rakks are particularly vulnerable to fire.