From Borderlands Wiki
(Redirected from Psycho)
Jump to: navigation, search 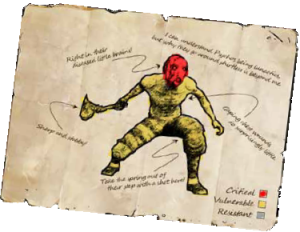 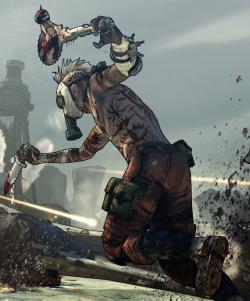 It's time for my pound of flesh!

Psychos are utterly sunbaked, completely insane Pandoran pirates. In a scrap, they’re entirely close combat brawlers, with no sense of honor and even less of a sense of self-preservation.

They’re human (well, human-ish) just like you, Vault Hunter, and so they have the same strengths and weaknesses in the wild. They’re nimble and quick, able to dodge attacks and sprint when they sense a clear path. Hits to the legs will hobble them as they maneuver; hits to the face will register as critical damage, while temporarily stunning them. Psychos who happen to be carrying aloft grenades can have the explosive shot from their hands.

And apart from their suicidal grenadiers, the psychos do not partake of any other technology better than the occasional rudimentary shield module. You won’t find gun-wielders here. Ask a psycho why, and he might lament that guns are too quick, that you can’t savor all the little emotions. But he’s more likely to rave about his mother before trying to viciously headbutt you. These are not well-adjusted men who can be reasoned with. So instead, shoot them.

Psychos will work together with other bandits—marauders, goliaths, nomads, and rats. Together, the bandit clans form Pandora’s most globe-girding society, and if a place lacks for all manner of these strays, beggars, crazies, thieves, and murderers, it’s only because either Hyperion forces or inhospitable wildlife forced them out.