From Borderlands Wiki
(Redirected from Marauder)
Jump to: navigation, search 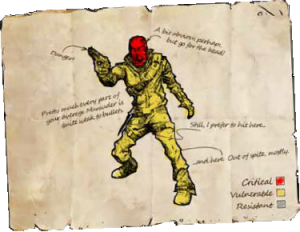 The marauder component of the bandit clans is a little more composed than the totally untethered psycho contingent. These guys can keep it together enough to operate firearms, and some of them can even drive vehicles. They can’t keep it together enough, however, to do anything with those things other than kill, though, so they’re still filed under “enemies.”

Since they’re bipedal, shooting out their legs can trip them or knock them down. Shooting them in the head deals critical damage, and will make them flinch. You’ll see an unsurprising trend, in that human enemies don’t like getting shot in the head very much. Being flesh, marauders are susceptible to fire.

Through various skills and some shields manufactured by Vladof, bullets aimed at you can be absorbed, or even reflected. Bandits are the enemy most likely to give you the chance to use these abilities. They all pack guns, and that’s what they use. Bandits only opt to fight with melee attacks if you bring the fight to them. Otherwise, they’re content to get somewhere comfortable and open up with the weapon in hand. They can take cover and fire, and also commonly employ grenades.

Nomads hold deep sway over marauders, and can command them all to fire, charge, or throw grenades in unison at the drop of a hat. If you hear bellowing from a nomad to the marauders in the area, this might be very actionable intel—if, for example, a half dozen grenades are about to get tossed your way, it might be wise to relocate.