From Borderlands Wiki
(Redirected from Loader)
Jump to: navigation, search 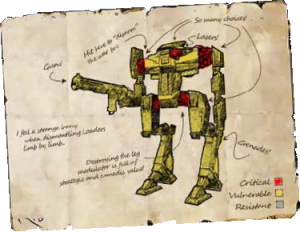 The meat and potatoes of the Hyperion army, and the brunt of the actual horsepower behind the labor that goes into a marvel such as Opportunity or the Hyperion space station. Robotics was going out, becoming passé, thought more trouble than it was worth, based on the difficulties and just general fastidious nature of the CL4P-TP robot series. But when Handsome Jack purchased Hyperion, one of the things he refocused the corporation on was its robotics line, discontinuing CL4P-TP models and taking the whole program in a new direction.

Loaders all have a red, eye-like sensor somewhere. This is what they see out of, and it’s always a critical-vulnerable area. Depending on the model of loader, the actual joints where the body meets the limbs might also be critical-vulnerable spots, and criticals in these locations may blast bits of the loader off entirely, perhaps severely disabling them; many loaders can be literally blown to pieces if you know exactly where to fire.