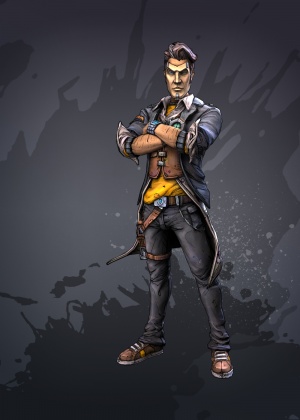 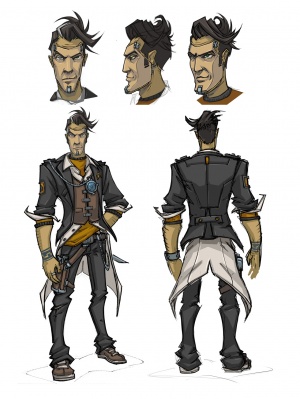 Handsome Jack is the main antagonist, CEO of Hyperion Corporation having risen to power by taking credit for the events that unfolded in the first game.

He talks to you on the ECHO throughout the game, and is always there to tell you about his pony made of diamonds, Butt Stallion.

Self proclaimed "Handsome Jack" stole the title of saving Pandora using the original vault hunters like marionettes, siphoning a siren's power to power the vault key, his sense of person is a comedian who's kind of a jerk. Continuously he tricks the player(s) into 'helping' him to get outta the jobs scott free. Ex. Jack asks the player(s) to go check up on his grandma, on arrival bandits are everywhere, after defeating the bandits and the surprise bandit going into grandma's room you find an old tool used by Jack's grandma when she beat him, blood everywhere Jack calls you up pretending to be sad then explains that he hired the bandits to kill his granny and wanted you to kill the bandits so he didn't have to pay them. Stuff like this shows jacks true nature that he ... some how.... hides from the general public.

Along the way of your game you can find audio logs or ECHO devices explaining a bit about each character.