From Borderlands Wiki
(Redirected from Crystalisk)
Jump to: navigation, search 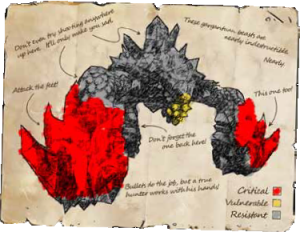 Crystalisks are strange, craggy creatures from deep underground. Their newfound presence on Pandora is thought to be a consequence of the recent opening of the Vault, which might have enticed them to the surface. When full grown, crystalisks range from large to enormous in size. They are not only unique in that the subterranean environment seems to have created sentient rock creatures, but also that they are a tri-pedal species… they walk upon three legs like a living tripod, and they have no other limbs.

On each of their three legs is a quartz-like crystal deposit, prismatic in the light. These deposits are their only sensitive regions—apart from the crystals on their legs, crystalisks are practically invulnerable. Bullets will deal no damage to the body, and they may even ricochet and hit the shooter. Status effects will not take hold. Explosives with a large blast radius will still deal damage to crystalisks if they detonate on the body. That’s very far from efficient, though—when hunting crystalisks, target the leg weak points exclusively. The brittle, fresh makeup of these crystal points makes them especially vulnerable to melee attacks and explosives.

Each vulnerable zone on the three legs represents a third of the crystalisk’s health. As each leg crystal is shattered, the radiant fragments of the destroyed sensitive area will splinter off and fall to the ground. When the spot is destroyed on all three legs, the crystalisk’s main body will explode during its death throes, splintering off further shining chunks from the crystalisk. The explosions of destroyed leg spots and the death throes of crystalisks are capable of hurting passersby, so keep back when they go. These chunks can all be picked up, and they are so valuable that they’ll add to your money total directly. That the diet of a crystalisk happens to be something mercs love to trade in doesn’t bode well for the longterm population of crystalisks on Pandora.

Crystalisks may be basically made of rocks, but they possess rudimentary intelligence, and strong senses of self-preservation and self-defense. If a crystalisk specimen has one or two of its weak spots destroyed it will actually usually attempt to orient itself such that the remaining vulnerable area is pointed away from the assailant. In doing so they use their own granite-solid centers as cover. Clever girls, indeed. Carefully tossed grenades or well-aimed explosive splash damage can still hit hidden critical areas, and the various Action Skills are all crucial for cracking the shell of a crystalisk.