From Borderlands Wiki
(Redirected from Constructor)
Jump to: navigation, search 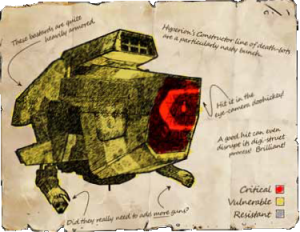 The baddest general units in the robotic workforce of the Hyperion Corporation, Constructor Bots, or simply Constructors, can form a beachhead all by themselves. They’re heavily armored, have only a tiny weak point, and are mostly immune to several types of damage. A Constructor can land near or right on top of a contested position, then use on-board defenses to whittle away at enemies while the Constructor digistructs Loaders to bolster the forward position.

Constructors are far too heavy for Maya to lift them with Phaselock, nor for Singularity grenades to even budge them. They’re also immune to Thoughtlock. While they are practically immune to status effects (only effects like Scorn or Cloud Kill that set a gas right atop the Constructor work even briefly), Constructors still take bonus Corrosive damage on impact, because of their thick armor.

Constructors spawn a finite number of loaders. They are best tackled at a distance, which allows the player to better dodge the homing missile attacks. Shooting the red eye results in criticals, and may stop the Constructor from spawning its current target.

When charging it's laser, the Constructor will say "Imma chargin' my lazor" which is a referance to Shoop Da Whoop.