From Borderlands Wiki
(Redirected from Bullymong)
Jump to: navigation, search 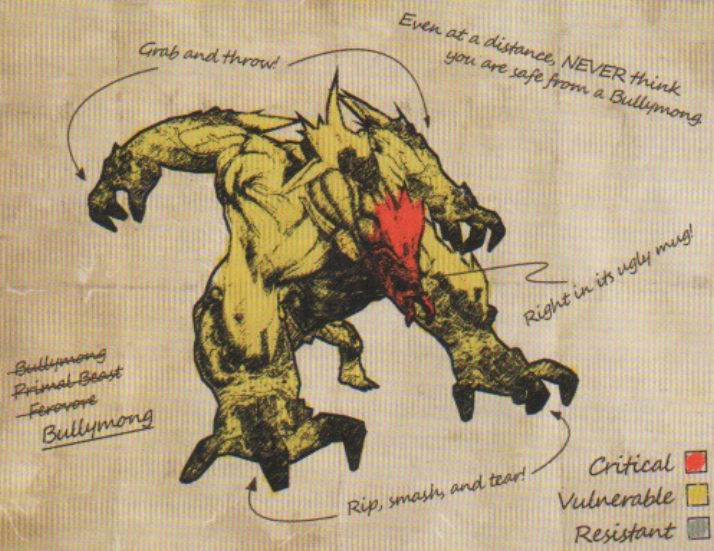 Large gorilla-like creature. They have 4 arms along with 2 legs. They tend to remain in the ice mountains, as they can jump onto them and throw ice chunks and rocks at the player and any enemies.

With opposable thumbs, possible bipedal movement, and a vibrant (if abusive) social structure, bullymongs represent one of the high points of Pandoran evolution. This still isn’t very encouraging. These somewhat intelligent, freakishly strong creatures have developed some higher cognitive function, but it isn’t enough for calculus more difficult than “Can I throw this thing at this other thing?” and “Can I dodge that thing being thrown at me?” Those are actually pretty advanced problems for a lifeform to solve, but a bullymong still isn’t going to be tutoring anyone through their trigonometry homework (even if they intuitively understand parabolas). And that’s just fine because you will be working out your difference with them via violence rather than rational conversation. These brutish four-armed arctic space gorillas chuck everything from rocks and barrels to cars; so of course it’s going to be violent.

Bullymongs can move by running, charging, and by propelling themselves in great parabolic leaps. Their leaping ability means you won’t find a spot that’s safe from them; if they’re aware of you, they’ll make it to you somehow. Bullymongs can leap and charge to attack up close, or they may hurl projectiles from far away. Smaller projectiles can be shot from the air, and doing so actually earns progress toward a Challenge. Large projectiles like cars and huge boulders cannot be destroyed, so get out of the way!

With one rare exception, all creatures in the bullymong family are vulnerable to fire. The head of a bullymong is the weak spot—yup, that tiny head. Bullymongs in general have large health pools, and require a lot of punishment to bring down. At low health bullymongs become severely injured, capable only of crawling and swiping with melee attacks.

You get a rapid introduction to bullymongs on Pandora—they tend to make their homes in colder climes, and your adventure starts out in the icy expanse of Windshear Waste. Bullymongs are the first wild beast you run into, and Knuckle Dragger, the local alpha among bullymongs, is the first boss you fight.